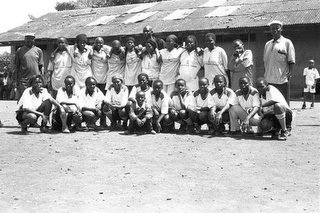 This entry though short is not one of lesser admiration for the work of a young man who together with a team of about 4 other managers are slowly building soccer for women in Kenya to international standards. The entry is a reflection that a feminist is not restricted to a particular category of certain sex organs but rather a true love and respect for women and their capabilities.

Three of the women from Dagoretti United Sister's Club, DUSC have been called to play in the World Cup qualifying match against Nigeria this coming April. These girls, Esther Nandika, Agnes Ocholla, Mercy Odero are only a small representation of a larger circle of women who through their own love for the game have kept it alive on parched soil, with little soccer equipment and not much support from their fellow male soccer players.

When the women began to win more and more games and collect sports equipment, the men began to say that the equipment really belonged to them. That women's soccer was nothing serious and their support for their male counterparts was in giving them the prizes they had worked so hard to win.

There are no bounds to a woman's sacrifice.

"DUSC we love you 'coz you tisha!"

More on DUSC, the young man and the DUSC management team later.