In July this year, I was privileged to attend the Young Women's Leadership and Knowledge Institute (YOWLI) in Dakar, Senegal. The institute, which ran from the 23rd June 2006 to 23rd July 2006, brought together a new wave of activism. Here I met remarkable young women my age (18 - 33yrs), who were working in their little corners of the globe to make the changes that many societies will surely benefit from. The conference was organized through the African Women's Millennium Initiative on Poverty and Human Rights (AWOMI). It was the Director, Yassine Fall's dream to see women from all over Africa and the African Diaspora, come together to discuss issues like, poverty, GBV, and the economic policies that did not favor the societies we live in and the women who often go uncounted when it comes to GDP. There were also discussions on ICT, accountability and the use of the media to engage youth on the events of their changing world. 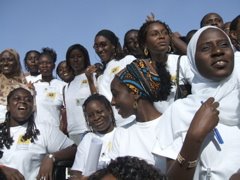 At the institute, there were young women from South Africa, Mozambique, Cape Verde, Zanzibar, Madagascar, Brazil, Haiti, Morocco, and 18 other countries. Each woman brought her expertise and areas of focus whether it was in Law, GBV, Sports, and AIDS/HIV etc.
The taught sessions were led by Yassine Fall, an economist with the United Nations, Dr. Habib Sy, Executive Director, Aid Transparency and Assitan Diallo, a leading gender rights activist from Mali. There were visits to parts of Senegal that bore significance to the institute and the learning attained there. These visits included an area occupied by flood victims who remain ignored by the government despite international coverage on their plight.
YOWLI culminated in a conference from July 16th – 18th 2006, attended by representatives from UNEP, Ms. Esther Hewlett, Founder, Youth Philanthropy Worldwide, Hon. Phoebe Asiyo, a former Member of Parliament, Kenya, Amina Ibrahim, Special Advisor on MDGs to the President of Nigeria, Mary Robinson, Former President of Ireland, Susan Nkomo, Women's Affairs, Government of South Africa, Barbara Charbonnet, Columbia University Earth Institute, among many other great leaders and role models.
For this year, the goal of the newly formed YOWLI regional branches is to seek and demand Accountability from the government, multinational corporations and local organizations. If the say they will do something, they have to make sure they will, furthermore, their actions should be to the benefit of the people they claim to represent and the same people they claim will benefit. 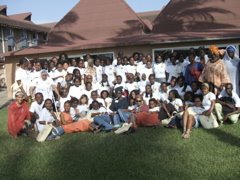 By the characters of the participants, much of Africa and the African Diaspora are about to be shaken by the determination of the women to make a change. Keep checking for more on YOWLI or if you have a burning desire to learn more about the movement email me at katiyawanawake@yahoo.com
Posted by the center at 2:50 AM No comments: